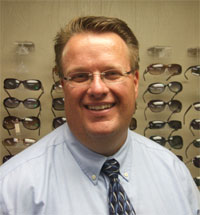 Dr. Carl C. Cottrell, a Meeteetse, Wyoming native, decided when he was a young boy that he wanted to be an optometrist after he got his first pair of glasses. He was so excited to be able to see that he wanted to do the same thing for others.  He graduated from Northwest College in Powell then attended the University of Wyoming. After receiving his doctor of optometry degree from Southern California College of Optometry in 1998, he then moved to Newcastle, Wyoming where he practiced optometry in the Newcastle Vision Clinic.   In 2010, Dr. Cottrell purchased another practice in Worland, Wyoming and began the Worland Vision Clinic. He loves being able to help people with their eye care needs in both communities and helping people see the best they can with personable exams and friendly service.  He served as president of the Wyoming Optometric Association in 2009, and has been a volunteer optometrist for three VOSH (Volunteer Optometry for the Service to Humanity) programs in Mexico and Guatemala where they provide hundreds of eye exams and used eyeglasses to underprivileged people.       Dr. Cottrell and his wife Candace enjoy raising their five daughters and watching them in their sporting, musical and drama events.